Tottenham owner ENIC Sports Inc. will inject £150M ($188M) into the club ahead of the new season. ENIC will allocate the funds to help the club invest on and off the pitch, according to a statement on Tuesday. It comes just days after Spurs secured qualification for the '22-23 Champions League. The money will allow Tottenham Manager Antonio Conte to strengthen his squad in the upcoming summer transfer window as he "bids to close the gap" on Liverpool and Man City next season. Under the terms of the capital increase from ENIC, Tottenham will issue convertible A shares and accompanying warrants. ENIC’s shareholding could increase from 85.6% to around 87.5% on conversion to ordinary shares (BLOOMBERG, 5/24).

Conte has "consistently said the squad needs improving if the club are to challenge for the top prizes." Tottenham Chair Daniel Levy said, "The delivery of a world-class home was always a key building block in driving diversified revenues to enable us to invest in the teams and support our ambitions to be consistently competing at the highest levels of European football. Additional capital from ENIC will now enable further investment in the Club at an important time" (REUTERS, 5/24).

U.K. PM Boris Johnson’s government reportedly worked for months to encourage the EPL to approve the "controversial Saudi Arabia-backed takeover of Newcastle United," according to a Guardian investigation. The extensive efforts to facilitate the deal, led by Minister for Investment Gerry Grimstone, were made "despite the government, and Johnson, repeatedly saying publicly that they had no involvement in the takeover talks." Grimstone became involved in discussions with then-EPL Chair Gary Hoffman and Saudi representatives, "apparently up to the office of the crown prince Mohammed bin Salman," to try to help secure a takeover that the government considered to be in the U.K.’s "strategic and economic interests." After the deal was completed, Hoffman told a meeting of the 20 EPL clubs that the government "had put pressure on the league to approve the takeover," but he added that the league "had not been influenced by the government pressure" (London GUARDIAN, 5/24).

Wimbledon is "exploring the possibility of legal action" against the ATP and WTA as "the row over the removal of world ranking points from the event intensified on Tuesday." Sources said that discussions "have already taken place with lawyers surrounding a potential breach in the long-standing agreement with the governing bodies" that allows the All England Club to offer points for match wins at the championships. It is understood that the other grand slam tournaments -- the Australian Open, French Open and US Open -- "are considering offering their support as part of a joint action." This would be an "escalation of a dispute that has overshadowed the first few days of the French Open" (LONDON TIMES, 5/24).

Dodgers investor Todd Boehly's purchase of Chelsea is "on the brink of going through" after the EPL board "formally announced he had passed its ownership checks." The U.K. government is now "expected to announce imminently that ministers are now happy to press ahead with licensing the deal." However, the sale process is "not quite resolved" as outgoing owner Roman Abramovich is "still waiting for final approval on the sale from Portugal and Europe." European authorities are "involved as Abramovich is also sanctioned there and has had a Portuguese passport since last year." Proceeds from the deal "will only start changing hands once the European Commission has rubber-stamped the agreement" (London TELEGRAPH, 5/25).

U.K. could clear safe standing for all EPL clubs

All clubs in the top two tiers of English soccer "could be allowed to introduce licensed safe standing areas next season," with U.K. Sports Minister Nigel Huddleston saying he was willing to change the existing all-seater policy to enable all EPL and League Championship clubs to "introduce safe standing sections under strict conditions," following a pilot involving five clubs in the second half of the current campaign. A "firm decision is subject to a final independent evaluation of the pilot confirming the findings of an interim report," Huddleston said. He added, "The government’s approach has been driven by safety considerations throughout and this will continue to be our priority. We are not complacent about spectator safety, nor are we complacent about the safety policies that have served spectators well for many years." The move comes at a time when "crowd safety and management are in the spotlight following a series of pitch invasions" (London INDEPENDENT, 5/24).

Meanwhile, Liverpool has canceled the Champions League final tickets of 13 supporters "caught offering to sell them online." The club threatened to "impose lifetime bans on anyone found to have done the same and report them to the police," as well as calling on social media companies to close more than 50 accounts and groups suspected of being "actively involved" in such activity (London TELEGRAPH, 5/4).

Serie A to open branded restaurants in U.S.

Serie A is planning to open a series of branded restaurants in the U.S as part of its new push into the market. In January, Serie A opened its first U.S. office in New York to gain a deeper relationship with CBS Sports and develop new business opportunities. Various initiatives have already been carried out, including the organization of the league's first official viewing party in collaboration with Ribalta Restaurant in Manhattan on May 11. A temporary exhibition is currently set up on Madison Avenue, called "Calcio is Back." Next week, the Met Museum will host the Serie A gala, which will be attended by players and coaches such as Alessandro Del Piero, Andrea Pirlo and Fabio Cannavaro. Additionally, Serie A is launching a series of affiliations in the U.S. with selected colleges, with a handful of Serie A coaches set to work with those universities' soccer coaches (CALCIO E FINANZA, 5/23).

Ticket prices for flights to Qatar up big ahead of WC

Flight tickets from the UAE to Qatar "have seen a drastic surge" ahead of the World Cup, with economy class airfares jumping by approximately 1,900%. The influx of visitors to the region means daily air traffic is "expected to jump from 700 to 1,800 movements." The UAE-based Khaleej Times reported that the cost of a one-way economy class airfare has jumped from 360 Qatari riyals ($99) on May 25 to 7,070 riyals ($1,942) on November 20, the day before the event starts. Currently, Qatar Airways and the UAE’s flydubai, Etihad and Air Arabia all operate flights between the two Gulf countries. FIFA World Cup organizers estimate that about 1.5 million visitors will attend the event (DOHA NEWS, 5/24).

L’Équipe reported that a police raid took place on Tuesday at Ligue 1 side Lille’s HQ, the Domaine de Luchin. France's judiciary police arrived at the club’s head offices and investigators "went on to question several people," notably administrative and legal administrator Julien Mordacq. The raid and questioning are potentially linked to proceedings around past transfers the club was involved in. Lille has reportedly "blocked the payment of agent commissions for the last few months and brought in a law firm to carry out an internal investigation before they are paid." As a result, several complaints have been filed to the city’s commercial court as well as FIFA (GET FRENCH FOOTBALL NEWS, 5/24).

LaLiga side Sevilla named British sportswear brand Castore its kit supplier in a multi-year deal starting with the '22-23 season (Sevilla).

PSG has "temporarily suspended" its women’s coach Didier Olle-Nicolle by mutual agreement. The decision comes after some of the club's players were allegedly exposed to "inappropriate actions and comments" (THEATHLETIC.com, 5/24).

The EPL will invest £1M per season "over the next three years" as part of the FA Women’s National League plan for the third and fourth tiers of women’s soccer in England (London EVENING STANDARD, 5/24).

The BBC has apologized after a message appeared on screen reading "Manchester United are rubbish" during a tennis update (PA, 5/24).

The '22 Chinese Super League season will kick off on June 3 after several postponements due to the COVID-19 pandemic (XINHUA, 5/24).

Chinese Super League side Chongqing will no longer be able to operate "due to financial reasons" ahead of the '22 season (XINHUA, 5/24).

Australian Football League attendance numbers this season are, on average, at their lowest since '96, when fewer than 30,000 people per match attended games. Across 90 games this season, attendances have averaged 30,517, well below the '19 pre-pandemic average of 35,122 across the full 23-round season (SYDNEY MORNING HERALD, 5/23).

The fall-out from Greg Norman’s controversial comments regarding the Jamal Khashoggi murder "continues to play havoc with the launch of the Saudi rebel circuit," with Alexandra Palace backing out of staging the glitzy "draft" party on the eve of the tournament in two weeks’ time (London TELEGRAPH, 5/24).

NBA Asia Executive VP & Managing Director Scott Levy will step down from his position at the end of June '22 to spend more time with his family in the U.S. (NBA).

"What happened in Paris with the new contract for Mbappe is not good, it's an absolute wicked thing. We have to be attentive to this" -- Serie A CEO Luigi De Siervo, on Mbappe's new contract with PSG (MARCA, 5/24).

"There's clearly a responsibility within football because when it is in our environment, we have got to do all we can to try and make sure it doesn't happen. I think we all recognize that. But it's a wider problem. It is behavior and a reflection on where we are as a country at the moment" -- England Manager Gareth Southgate, on the rise in fan disorder at matches (ESPN.com, 5/24).

The London Telegraph's Tom Morgan & James Ducker write that relegated EPL side Burnley's problems "go back further" than U.S.-based owner ALK Capital -- but ALK's takeover "has been a disaster for the club."

The #PL has announced its latest funding into women’s and girls’ football, with £4.5m to support clubs in tiers 3 and 4 of the pyramid ➡️ https://t.co/bWtCnJN9GY pic.twitter.com/ticoEHwBrQ

The 50-year-old has signed a contract with the Wolves until 2025.

when you discover financial irregularities at the International Bowling Federation https://t.co/SRLUs9YAH6 pic.twitter.com/j9vWEWCqVx

Official. Marcelino announces his decision to part ways with Athletic Club, he’s not gonna be the manager for next season. ⚪️🔴 #AthleticClub

SPONSORED CONTENT
PREVIOUS
Monday, May 23, 2022
Quote Of the day

Boehly approved on Chelsea; Anaheim walks away from Moreno deal; Combine to stay in Indy for now and Chase Center gets new GM.

USA Track & Field celebrates a decade of being...
Read More

USA Track & Field celebrates a decade of being under the guidance CEO Max Siegel and discusses how he bridged the gap between the performance on the field and in the front office. Joining us on today's episode are Olympians Jackie Joyner-Kersee, Chaunte Lowe and Wallace Spearman along with USATF CEO Max Siegel himself.

Today’s episode features Matt Caldwell, president and CEO of the Florida Panthers, talking with SBJ’s Abe Madkour about his unconventional path into the industry, his experience at West Point and during combat in Iraq, and how the leadership and teamwork he encountered in the military shapes his career today. Caldwell is a member of SBJ’s Forty Under 40 class of 2018. 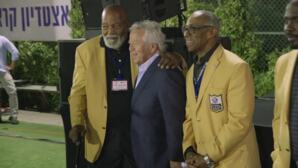 A look at the career of SBJ Lifetime Achievement Award recipient Robert Kraft.

Register for a free SBJ account to unlock one extra article per month.

© 2022 Leaders Group. All rights reserved. The material on this site may not be reproduced, distributed, transmitted, cached or otherwise used, except with the prior written permission of Leaders Group.

Upgrade your subscription to get all the news you need:

Adding SBJ weekly content will give you the comprehensive view of sports business with:

Upgrade your subscription to get all the news you need:

Adding SBJ daily content will give you the comprehensive view of sports business with: